Donald Hamilton Fraser has exhibited around the world, while also being made a Fellow of the Royal College of Art in 1970, Honorary Fellow of the Royal College of Art in 1983, and then elected Royal Academician in 1985. His paintings are composed of the sea, in block and contrasting colours. The sea itself, in many of his paintings, the sea is represented by only two or three variations of blue, and contrasted against the sky, which is another blue entirely. The seascapes and other landscapes that he paints are very vivid, only using light and bright colours, with very little use of darker colours, and almost no use of black at all. These colours create a warm, and calm atmosphere within each of the paintings. These colours are only used in block, and are rarely mixed in with one another. This use of blocking colours adds a level of simplicity to each of the paintings. The simplicity, and the calm atmosphere couple to create soft and smooth paintings of seascapes. 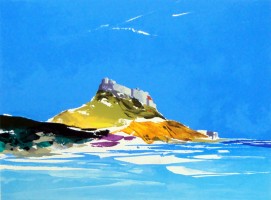 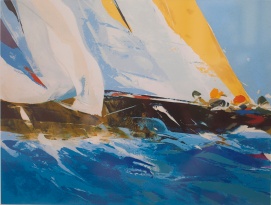