Becoming an Image is a series of performances where Heather Cassils ‘unleashes an attack on a 2000 pound (~900kg) clay block. Delivering a series of kicks and blows in total darkness, the spectacle is illuminated only by the flash of a photographer, burning the image into the viewer’s retina.’ This was first performed in the ONE Archives in Los Angeles, the oldest active LGBTQ archive in the United States, and was originally going to be a site-specific piece. Heather Cassils began to perform this around the world, including London, Montreal and Los Angeles. The only evidence of the performance is the snapshot that provide small instant amounts of illumination, and the clay block that which Heather Cassils releases all of her energy on. This clay piece is then exhibited, in its raw form, just as the artist left it when the performance was completed. 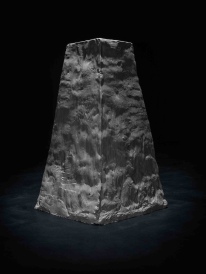 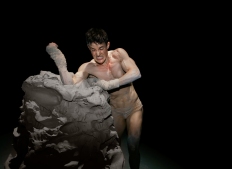